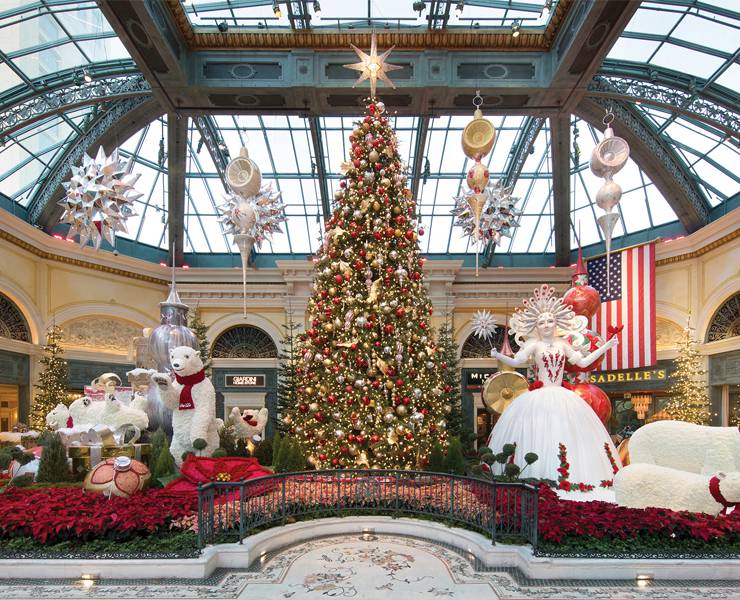 Each year, the iconic Bellagio Conservatory & Botanical Gardens changes out its fall display for a winter theme and, despite the challenges faced this year, has done it again for this season, bringing visitors into the magical world of Queen Bellissima with four beds of floral-inspired fantasia in its new “Hopeful Holidays” exhibit. It’s a wonderful way to spend an afternoon.

Visitors start by checking out the frolicking of the Coca-Cola polar bears amid huge spire and ball ornaments near the entrance. They then move on to the main bed, where spire and starburst ornaments hang overhead and surround the 42-foot silver-tipped fir tree from Northern California. It’s decorated with 2,500 red and gold ornaments and 7,000 white lights. A five-car toy train races around its track below.

Near the tree is the lovely queen in a white Dior-inspired dress with red accents. Upon her hand perches a bright red cardinal, an element that designer Ed Libby drew over from the fall exhibit. It represents “a kind of message from the heavens that things were going to be OK,” says Libby. It’s actually the first time that a design element has been used from one exhibit to the next.

That design continues in the next area of the display, where massive pine cones and huge floral poinsettias, fir trees adorned in white lights, and masses of live green plants and poinsettias set off a huge jewel-encrusted egg, which is open to reveal a pair of cardinals perched inside. Says Libby, “We’ve chosen poinsettias to represent a story in Mexican culture where little children went into the church and they … didn’t have any gift to lay by the manger and they laid weeds. And then the next day the (weeds were) beautiful, spectacular, colorful flowers, and that’s kind of the background story of poinsettias. I think there’s something really special about flowers made out of flowers, and that really is something that I love. I’m an event designer in my outside world. I love bringing that component to my role here at Bellagio and doing these floral sculptures.”

In the center bed is the queen’s fairytale-like carriage being drawn by a team of four magnificent white horses. Inside, the plush area makes a good spot to capture an Instagram pic (or two), and windows and entrances let you glimpse the other beds.

And in the south bed, a quick look reveals a team of elves decorating away, an homage to the hard-working team of gardeners, florists, designers, engineers and electricians who make the exhibit come to life each season. “It takes six months to plan, and then it takes six days (to assemble),” says Libby. “Around the clock, 75 people, 24 hours a day for six days. There’s a team that’s worked so hard to stay together this year to produce the show … So that’s our kind of tribute to the camaraderie of the team.”

Each little detail has a meaning, says Libby, from the tiaras on the polar bears, […] 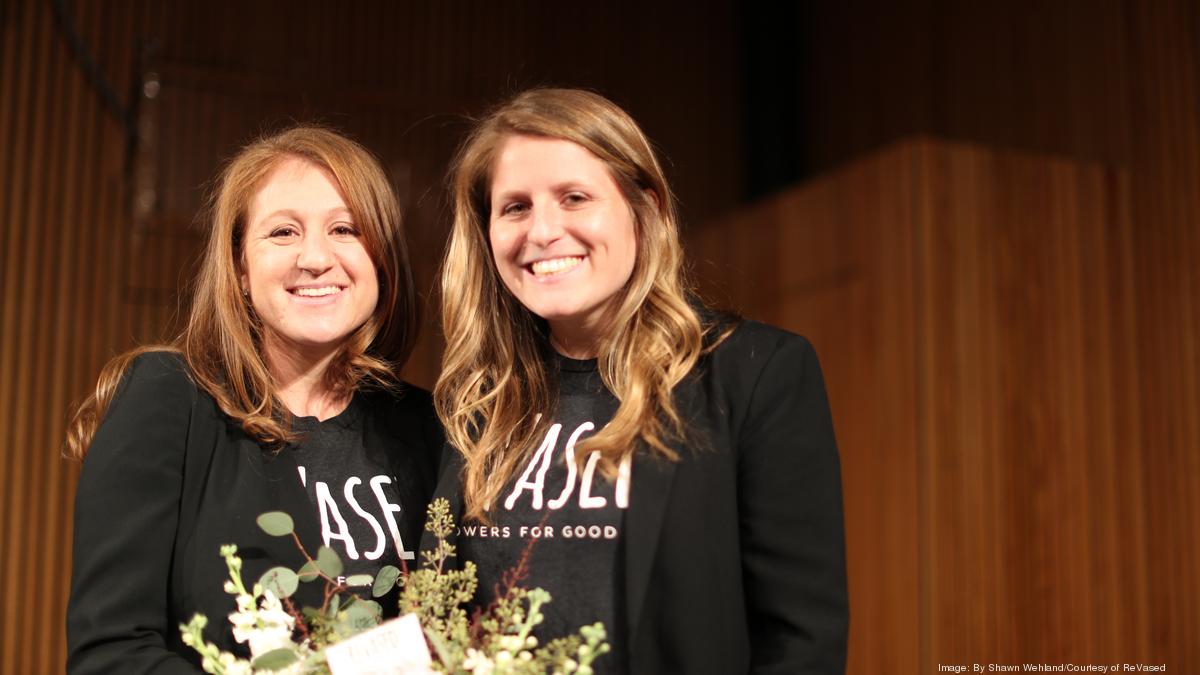 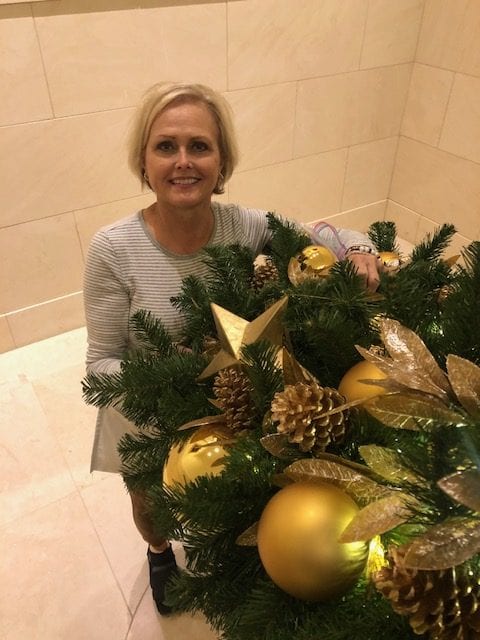 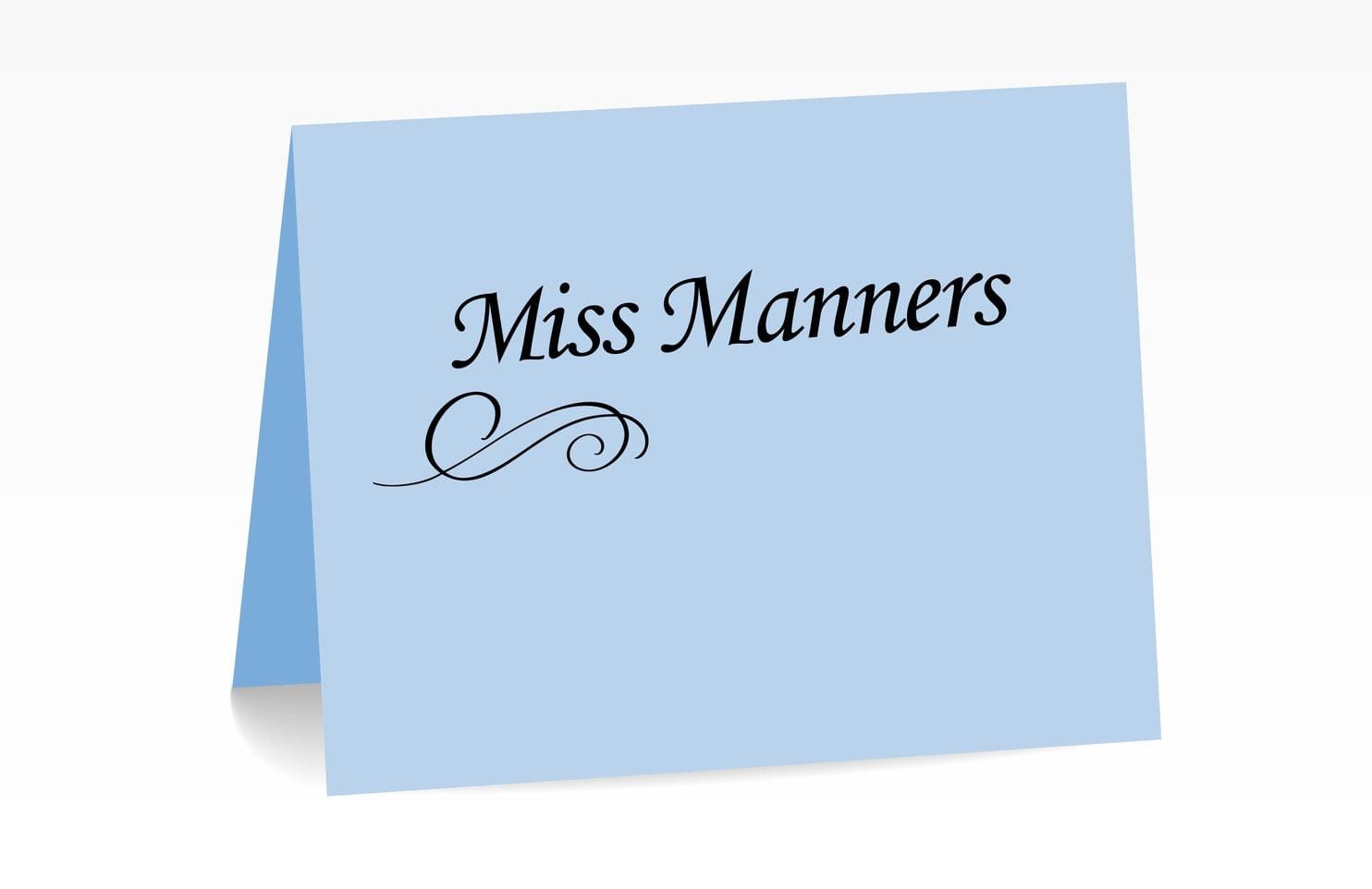 Miss Manners: Floral runaround could have been avoided 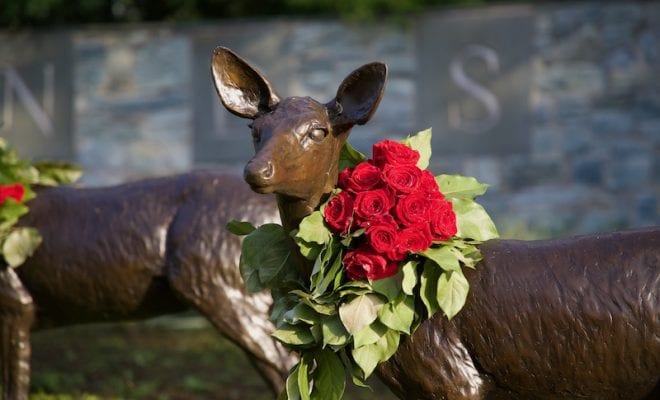