Garden Media Group’s annual report on trends in
the “green industry” keeps you on the cutting edge
of the horticulture industry and gives you the juice
to breathe new life into your business.

Every year, Garden Media Group (GMG), a boutique PR and marketing firm for the “green industry,” identifies what’s trending in gardening and horticulture in its annual “Garden Trends Report.” This year’s report, “Seeing 20/20,” highlights human-beings’ connection with nature, the soil and a more thoughtful approach to life. It illustrates how, by combining the wisdom of the past with the science and technology of today, the future of our industry – and the world – has the promise of being very bright.

“In 2020 and beyond, the green industry will be at the forefront of urban growth and development,” says Katie Dubow, president of GMG.

Here is a snapshot of the trends in GMG’s “2020 Garden Trend Report.”
For more information, download the complete 44-page report at grow.gardenmediagroup. com/2020-garden-trends-report.

Trend 1: Cities of the Future

Right now, half of the world’s population lives in urban areas, and that number is expected to rise to 70 percent by 2050. Because people are longing for nature, thriving cities of the future will combine green infrastructure and horticulture to positively impact the well-being of their citizens and the environment. Tranquil, plant-filled environments for business, living and pleasure are a necessity.

According to Jim Zwack, vice president and general manager of The Davey Institute at The Davey Tree Expert Company in Kent, Ohio, creating a well-canopied city is a cost-effective strategy to improving communities’ health, resilience and economy. Sustainability will be the key to managing growth.

The influx into gentrified neighborhoods near Central Business Districts (CBDs) – the warehouse, factory and logistics districts adjacent to city cores – has been, in part, influenced by “Central Recreational Districts” (CRDs), which are defined by the prevalence of parks and other green spaces, historic places and other “Instagrammable” places for people to gather. These green-space developments (think New York City’s High Line) are the magnets for the back-to-the-city movement, which is attracting younger, more affluent and educated people to urban centers and producing increased property values (16 percent, on average, nationally) and growth in jobs and population (10 percent in each category, on average).

Urban growth is creating trends in green industries, such as energy efficiency, resource sustainability and a massive demand for “green-collar” workers. Gardening is as popular as ever: Spending reached $40.2 billion in 2018, according to Euromonitor International, and it is expected to grow 22.6 percent, to $49.3 billion, by 2023. Yet horticulture jobs already outnumber grads by two to one. We need to be thinking about diversity in education. College tuition in the U.S. is going up, and enrollment is trending downward (a decrease of 15 percent by 2025 is projected). Students are carrying $1.5 trillion in student loan debt. Generation Z (23-year-olds and younger in 2020) doesn’t want the burden of that kind of debt. While many important jobs in our industry require higher learning, there are many green jobs that require less college education, perhaps an associate degree or vocational training – or, even, on-the-job training.

The jobs are there, and the passion is there, but for many young people, when it’s time to pick a major, they do not consider plants as a career. We need to get creative about how to train future generations.

Erosion, deforestation and other damaging land use practices have already washed away one-third of our topsoil. The Food and Agriculture Organization of the United Nations (FAO) warns that if we continue on this course, we will lose it all by 2050. In addition, soil has been stripped of its nutrients.

Trend 4: Thinking Outside the House

The houseplant trend is still growing, with no end in sight. Younger generations, finding themselves with less space, time and money, are turning to indoor plants for their benefits – and to connect with each other outside of the house. Plants clean the air, reduce stress, enhance creativity and connect people with nature, and thanks to a new generation of “plant parents,” the houseplant obsession is seeing greater percentage growth than perennials, shrubs or trees.

It’s clear that green industry players who offer education and cultivate community win big. For example, create opportunities in your store for plant parents to attend educational events, network with other plant lovers, meet their favorite Instagram celebrities, and snap photos and post to social media. More and more affinity groups of plant lovers are spinning off to create their own groups. This is key to forwarding a company’s diversity agenda.

Months before Pantone announced “Classic Blue” as its “2020 Color of the Year,” GMG predicted that indigo would be the color of the year in 2020. Plants with blue flowers have always been best-sellers. Bushel and Berry, which produces compact, ornamental berry plants for home gardens, combines the container plant trend and blueberries’ popularity as a superfood. Can’t you just taste a blueberry event? Remember, 74 percent of consumers value experiences over things. The lost art of indigo dying is making a comeback, and shibori – the Japanese dyeing technique of creating patterns on fabric – is a trendy workshop for all ages.

Just like the plight of the pollinators, amphibians like frogs and toads are going extinct at an alarming rate. Habitat destruction, pesticides, pollution and increased UV radiation all play a part in population decline. Because of this, we expect to see renewed interest in ponds and other water-garden features in 2020 and beyond. Water brings so much life to a garden, and homeowners want their children to be familiar with these remarkable creatures and do the right thing for the environment.

Trend 7: The Future of Fungi

Mushrooms are a super food, super fun to grow and just might turn out to be super for the planet. Fungi could potentially solve some of the world’s most pressing problems, like plastic use in our industry.

In 2012, Yale students came across Pestalotiopsis microspora, an endophytic fungus capable of breaking down and digesting polyurethane and living without oxygen. It could clean up landfills from the bottom up. More recently, Katharina Unger, at Utrecht University in the Netherlands, developed an edible fungus (mushroom) that eats plastic and, reportedly, tastes good

Gone are the days when clothes were mended and work boots resoled. Only 9 percent of materials consumed today are reused. A circular economy concept uses nature as a template, utilizing green infrastructures to create new business models; minimizing waste; doing more with less; making the most out of resources; ensuring that products have a second life, where possible; and replacing planned obsolescence with restoration. This is forecasted to generate $4.5 trillion in new output by 2030.

This new ethos is not just for dreamers, either. Big companies such as GM, Annie’s and Unilever are getting on the circular bandwagon. In fact, Unilever’s sustainable brands grew 46 percent faster than the rest of their business in 2018. “As leaders in our industry we have a responsibility to act sustainably and find ways to renew, repair, reuse and recycle,” says Dubow.

Garden Media Group, based in Kennett Square, Pa., is a boutique PR and marketing firm for the home, garden, horticulture, outdoor living, and lawn-and-landscape industries.
Visit GMG’s website at gardenmediagroup.com, or contact them by email at info@gardenmediagroup.com or by phone at (610) 444-3040.

The Art of Permanent Botanicals 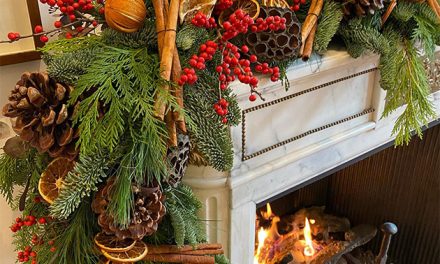