On the Farm with David Beahm

A top NYC event and destination wedding producer draws his inspiration from an historic Pennsylvania farm.

On weekends when he doesn’t have an event, party maestro David Beahm escapes to Thistle Dew Farm, his rural getaway located 90 minutes outside Manhattan in Pennsylvania’s Bucks County. There, he trades his dapper bow tie and tailored vest for a plaid shirt or the hooded sweatshirt from his alma mater, Elon University, in North Carolina, and heads outdoors to tour his growing fields or walk to the stream with his dog, Jim Beahm.

To Beahm, event designer and founder of David Beahm Experiences, time spent here is essential for his well-being and creativity. And as flower farming and the origin of flowers gain attention in the wedding and event profession, Beahm embraces the farm as an essential part of his company’s brand and mission.

“I find solace in digging in the dirt,” he shares. The sensory joy Beahm gains from leaving the city behind for even 48 hours reminds him of summers at his grandparents’ traditional victory garden in Virginia. “This farm saved me after 25 years in New York City,” he confides. “This is where I come to think. And this is where design happens. It doesn’t always happen sitting in my desk in Manhattan. It happens here when I’m digging in the dirt.”

Beahm’s path to being one of the industry’s top wedding and event producers began at age 12 when he worked for his godfather, aflorist in Luray, Va. He later taught high-school band and choir before earning an M.F.A. in musical theater from San Diego State University while simultaneously working at the San Diego Opera. When a mentor there encouraged Beahm to dream big, he migrated to New York City in 1995, remaining in opera for a short period before deciding that managing the traveling company for New York City Opera and being on the road continually was not why he moved there.

“It was an amazing experience learning how to take a show on the road,” he recalls. “Now I have David Beahm Destinations, and I tell people that we basically set up a Broadway show in an afternoon. It performs and then we take it down, and it’s out the door by 2 a.m.”

His career as an event entrepreneur draws from those adolescent flower shop skills (hand-wiring a bouquet, for example) and theater and opera production know-how, landing gigs with some of New York’s top party planners. Beahm formed his event design company 1998, and three years later, in 2001, he was propelled onto a much larger stage when he designed Michael Douglas and Catherine Zeta-Jones’ wedding. Yet, at the time, he was still sleeping on a pull-out couch in his studio, a fact he mentions to illustrate the challenges of making a living in the event business.

In December 2014, Beahm bought his first home, a 19th century two-on-two German farmhouse built from old millstone. There are portions that predate the main house, which was built in 1813. A former owner named the 10-acre homestead “Thistle Dew” because it sounded like “this will do,” Beahm shares. “That’s exactly what I said to my realtor. At the time, I was looking for something bigger – to have a wedding venue. Finally, I said, ‘You know what? This will do just fine.’”

Beahm and his partner Matthew Pattison grow flowers, as well as vegetables and herbs. They keep chickens and bees and delight in sharing fresh eggs with friends in the city as well as jars of signature Wildflower Honey (the label of which has a whimsical illustration of Farmer Dave with bees buzzing around his distinctive beard).

The farm’s main flower crops include 150 peony plants, about 100 Hydrangea shrubs and a few thousand Dahlia, as well as favorite summer annuals such as Zinnia and Cosmos. The blooms beautify the landscape at Thistle Dew, but they also make their way into the hands of David Beahm Experiences’ clients.

“We’re never going to be that big,” he says in response to my question about expanding into commercial cut flower production. “One of our events could wipe out the whole farm.” Yet bringing armloads of hanging amaranth and dill from the farm to adorn a venue, “feels really good,” he acknowledges. “And, if I can look at a bride and say, ‘Those flowers are from my farm, and I picked them this morning for you,’ that’s going to sell.”

It’s a sincere act from one who values the ephemeral quality of Thistle Dew’s flowers. “I’m not doing this as a marketing scheme,” he says. “I think the slow farms-slow flowers movement is going to be more and more necessary as we move into the future. It’s really all of our responsibility to educate consumers that these [flowers] are not just disposable things. Much effort brought them to you, and you should have the ability to appreciate it.” 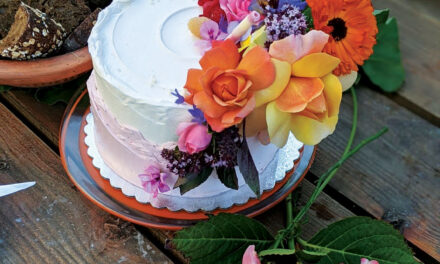 A Florist’s Guide to Edible Flowers